The Davis Bike Club Race Team is part of the Davis Bike Club (DBC). DBC is a non-profit organization incorporated in 1979. The club has about 500 general members who participate in practically every type of cycling, including social riding, touring, ultra-distance, and racing. DBC (including the Race Team) is a community-based club and is open to anyone. Learn more about Davis Bike Club Membership.

Our goal is to promote all disciplines of competitive cycling, offer support to all ages and abilities with a sense of teamwork, competitive spirit, and a strong sense of community. We value the opportunity for growth and development of competitive ability for all members of the team as they strive to better themselves, and represent the team, the Davis Bike Club and the sport of cycling in a positive manner to the community.

We use TeamSnap to communicate and coordinate about upcoming races, training rides, and other get-togethers. We ask that every team member subscribe to TeamSnap to ensure solid communication.

Questions about the team, how to join, how to communicate, or anything else? Just get in touch with Race Team Director Mike Fee at mike@teamfee.com.

Team meetings are back on! We host them on an ad hoc basis, typically at a team member’s home (and usually outside). As with everything else, team meetings are scheduled and announced through TeamSnap.

DBC Race Team members are required to wear a current uniform while racing. For races scheduled before uniform delivery, it is acceptable to wear the previous season’s uniform. Orders are placed every 30 to 45 days (see Team uniform order link below). Racers will be reminded about upcoming orders via TeamSnap and, in an effort to be redundant, through the Team email list. Racers may be entitled to reimbursement for some uniform expenses. 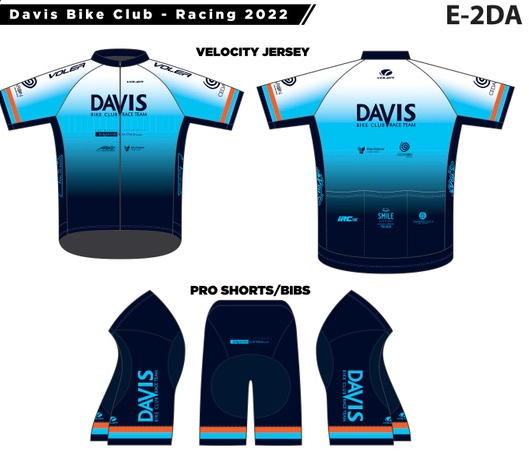 A core part of our mission is making cycling and bike racing accessible to all kinds of riders. Knowing that racing bikes are expensive, and that purchasing a bike may inhibit people from diving into cycling, we coordinate a borrow-a-bike program.
The program is simple: DBC members with an extra bike that they’re willing to share complete this form. New riders hoping to give road riding and even racing a try complete this form. The Race Team Director then matches available bikes to needs.
Any questions? Just contact the DBCRT Director at race-team@davisbikeclub.org.

The Davis Bike Club has a long history of representing a diversity of cyclists, including a racing team. Although the numbers of racers are a relatively small percentage of the total DBC membership, the team enjoys a remarkable portion of the club’s budget. The team budget provides support for entry level racers all the way to an elite squad which participates in USCF National Racing Calendar (NRC) races. The team places special emphasis on rider development, particularly with its juniors team.

Racing for the Davis Bike Club has many benefits but also carries responsibilities. The benefits are obvious — financial and logistical support to race. The Club has high expectations for DBC racers. While cycling, DBC racers represent the club and the team’s sponsors and must maintain a high level of self control, respecting other cyclists, motorists, pedestrians, and traffic laws. Good sportsmanship and respect of race officials are absolutely essential. Racers must sign the DBC Code of Conduct before being issued the team uniform.

Additionally, DBC is a community-based club and sponsors many cycling events, all of which require significant volunteer efforts. Indeed, proceeds from two of DBC’s non-racing events — the Double Century and Foxy’s Fall Century – provide for much of the race team’s budget. It is only fair that the race team provide substantial volunteer support for DBC events. All DBC racers are expected to volunteer a minimum of eight hours per season at club events.

DBC racers’ first priority is to volunteer at DBC events: While it is permissible to occasionally ride DBC’s century and double century events, DBC racers will register and pay for them as regular riders and may not use them as informal races. DBC Race Team members riding in DBC events represent the club and shall behave in an exemplary fashion.

All riders must obey all rules and regulations as published in the United States Cycling Federation (USCF) Road and Track Rulebook. The Rulebook may be downloaded from the USAC here. The rulebook also includes sections on mountain bike and cyclocross racing.

All riders must behave in a manner appropriate to DBC and team sponsors they represent. Appropriate sportsmanship is required at all times (before, during and after an event or training ride). DBC will honor any disciplinary action, including but not limited to suspensions taken against any rider by USAC, NCNCA, or NORBA.

Riders violating these Rules and Regulations will be subject to disciplinary action, including suspension or termination. The DBC Race Team Committee will review cases and advise the DBC Board of Directors who will make final decisions on disciplinary action. Actions may include reduction in race reimbursements, community service, suspension from the team, and/or recommendation to USAC/NCNCA/NORBA for general suspension.